Best Places To Visit in Croatia

Best Places To Visit in Croatia

Europe is so diverse and breath-taking that choosing a country to visit in Europe can be a difficult task. Switzerland, France, Austria, UK, Spain, Italy in Europe are a few of the most visited countries in the world. Not surprisingly, Croatia did not have a very prominent place in the travel map of Europe till recently. The country’s popularity was also temporarily hit by the Homeland War in the early nineties.

However, things are slowing changing for Croatia. Croatia is an emerging tourist destination and has been rated as Europe’s fastest-growing tourist destination for the past few years. Nestled between Eastern and Western Europe, Croatia with its stunning natural attractions, miles of unparalleled beaches, fairy-tale architecture and the turquoise Adriatic Sea is a paradise waiting to be explored. If you have not visited Croatia, it is time to add it to your bucket list.

When to visit Croatia: July and August are the peak season in Croatia because of school holidays. However, the peak season is always not the best season. May, June, and September are also a good time to visit as you can avoid the queues and crowded beaches. The weather is not so hot and humid and the accommodations are still affordable. Between November to April, it is freezing cold  and the islands are nearly shut down.

How to reach Croatia: Croatia is well connected. All big European cities offer direct flights to major Croatian cities from April to September. Split and Zagreb are well connected throughout the year. You can also reach Croatia by bus, train, and ferry through the connections may not be the best.

Getting Around Croatia: Buses and ferries are frequent, comfortable and efficient. It is quite easy to rent and drive a car in Croatia. Trains only connect the big towns. Domestic flights, when available, are generally affordable. Taxis are expensive. Uber is reasonable and available in major towns of Croatia.

Currency: Croatian currency is Kuna (kn). Though Croatia is part of the European Union, it is best to use Kuna here. Euro is also widely accepted but you will get a change in local currency and the exchange rate would not be the best.  Credit cards are sometimes not accepted by vacation rentals, small restaurants and shops. ATM is the best for getting the local currency. One dollar is equal to 6.80 kn.

Top Places to Visit in Croatia:

Croatia has so much to see, that it is not easy picking up the best. There are more than a thousand islands, lush national parks, world heritage sites, and never-ending coastline. Let us list the must-see

The Croatian capital Zagreb may be overshadowed by the scenic Split and Dubrovnik, but it needs to be explored for its street art, museums, theatres, Austro-Hungarian architecture, and buzzing nightlife. The sprawling cosmopolitan city has many shopping, eating, and entertainment options. Zagreb sightseeing starts from Bana Jelacica – the heart of the city where all cafes are located making it an ideal meeting place. Museum of Broken Relationships, Zagreb Cathedral, tree-lined Strossmayer Promenade, Stone Gate, and the colorful Dolac Market are some other popular tourist spots. 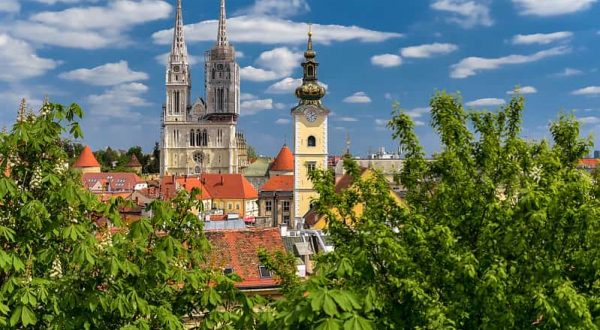 Any trip to Croatia cannot be complete without visiting the stunning Plitvice Lakes National Park. Located close to Zagreb, Plitvice Lakes consists of sixteen aquamarine lakes connected by cascading waterfalls and surrounded by lush woodlands. The wooden walkways and footbridges crisscrossing the park allow the visitors to get up close to the breath-taking falls. The bordering dense forest is home to deer, wild boar, and bears.

There are different hiking trails winding through the park with varying degrees of time and difficulty-level.  You can take your pick. Swimming is not allowed in the park. July and August are a very busy time with about 1500 daily visitors and you may have to walk behind lines of people at times. There are three hotels inside the park and a few on the edge of the park. Staying close to the park for a night is a good idea as you can get a head start before the people begin to arrive from neighboring cities.   Entry  7 am – 8 pm in summer and 8 am – 4 pm in winter. 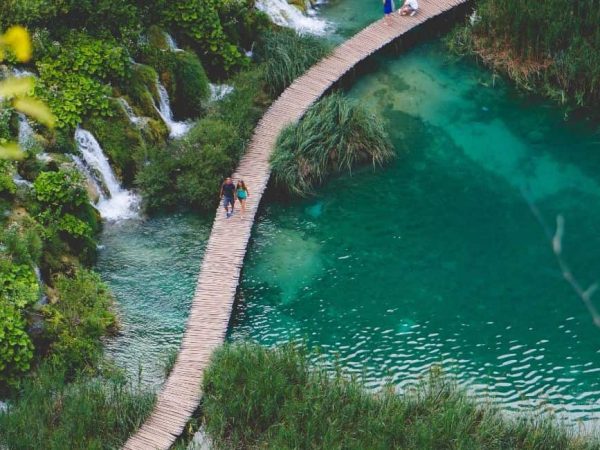 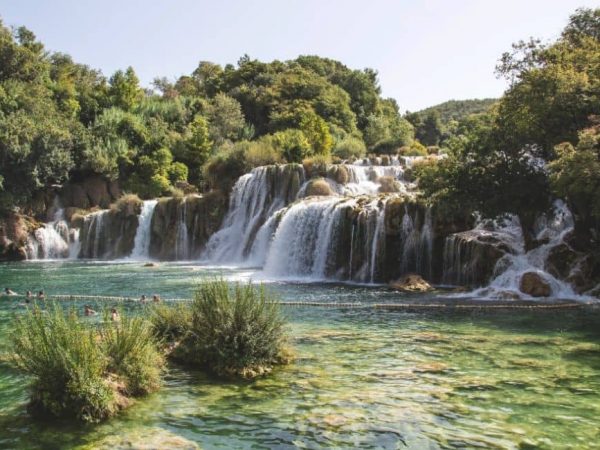 Croatia’s second-largest city, Split is another popular destination and the main port for trips to Dalmatian islands. The whole of the Split city is built around the huge Diocletian’s Palace which was built by Emperor Diocletian at the end of third century AD. The palace looks more of a fortress covering an area of 400,000 square feet. It can be accessed by a massive four gates, has a maze of narrow marble walkaways and numerous museums, churches, cafes, and shops inside the premises. Within the palace, you can admire the Cathedral of St. Domnius with its bell tower.

The Southern gate of the palace leads to a seaside promenade. The promenade has rows of trendy boutiques and seafront cafes, making it the most happening street in Split. While in Split, one can swim at Bacvice Beach and shop at the vibrant Green Market. The clifftop Klis fortress is just nine miles from Split and a must-visit for fans of Games Of Thrones. 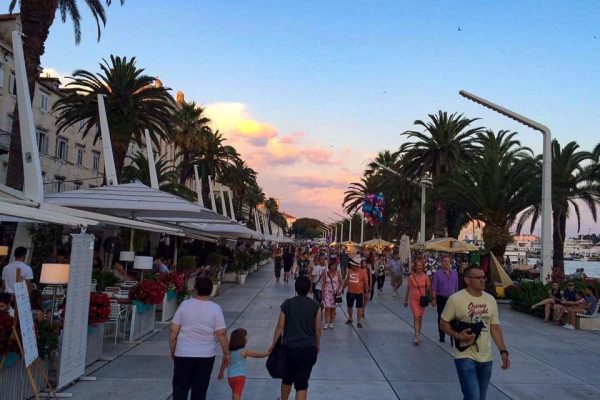 A beautiful Croatian island off the Dalmatian coast, Hvar is most sought after by the affluent, celebs and the party lovers. Hvar has some of the country’s best luxury resorts and swishy restaurants. You can see flashy yachts lining the harbor and people partying till the wee hours of the morning. However, there is much more to Hvar than being a party place. You will be mesmerized by the beauty of unspoiled beaches, secluded coves, lavender fields, and lush vineyards. The car-free city of Hvar city has an impressive town square, charming churches, Gothic palaces and a hilltop fortress from where you can enjoy bird’s-eye view of the blue sea and the surrounding islands. You can rent the boat to explore the neighboring Pakelni islands with their pristine beaches and hidden lagoons.

One can take day tours to explore the enchanting islands around Hvar. The most popular tour takes you for a trip to Green and Blue cave. Green Cave located on the islet of Ravnik, is a natural phenomenon that occurs when the sun rays reach the bottom of the small cave and reflect the green algae there. You can swim and cliff jump in the Green Cave. The Blue Cave on the islet of Bisevo island is a must-see. The ethereal blue color is created by sun rays seeping in the cave and bathing the interiors of the small cave.  The hidden lagoon Stinvia, tucked between two high rocky cliffs, is artistic and breath-taking.v 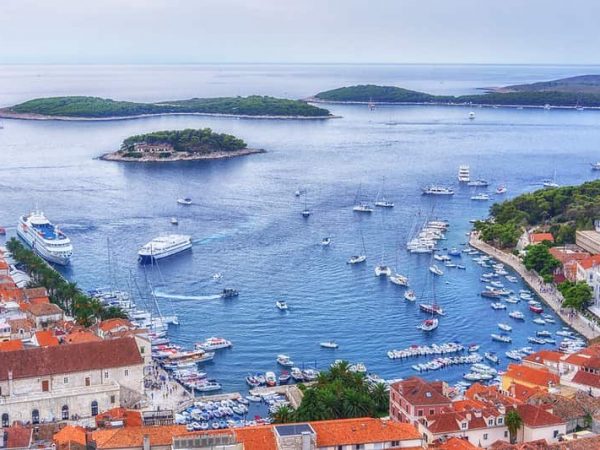 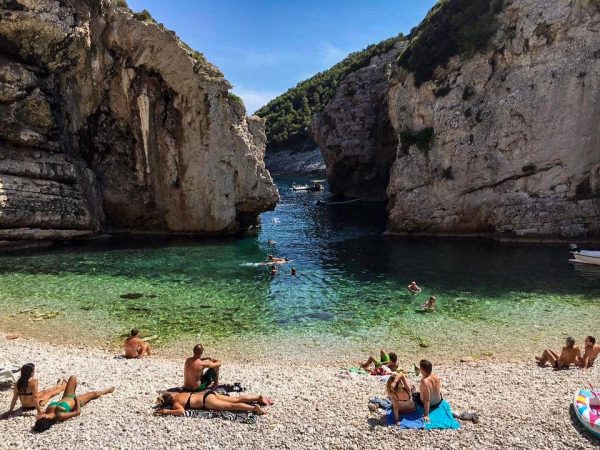 Nicknamed ‘Pearl of Adriatic’ Dubrovnik has been the most popular tourist destination of Croatia for ages.  The city however capitulated into the league of a ‘must-see destination’ after its treasures were shown extensively in the Game of Thrones. You are swept into a bygone era as you explore the old town with its cobbled streets, elegant palaces, and classy churches. The majestic city walls encircling the old town is topped by a two-kilometer long walkway. It is a stimulating experience to walk around the majestic wall and reach the vantage point. The panoramic view of orange terracotta rooftops, church towers, blue sky, and the glistening Adriatic sea will definitely leave you spell-bound.

You cannot miss pedestrian-only street Stardun – a limestone paved 300-meter boulevard. Lined with cafes, pubs, and boutiques it is the place to chill and mingle over coffee and beer. You can take the cable car to the peak of Mountain Srd and enjoy the sprawling views of Dubrovnik and Island Lokrum. Other famous attractions are Rector Palace, Square of the Loggia, Church of St. Blaise, and the Fort Lovrijenac. The best way to experience Dubrovnik is to wander into its narrow alleyways and explore the hidden crooks and corners. 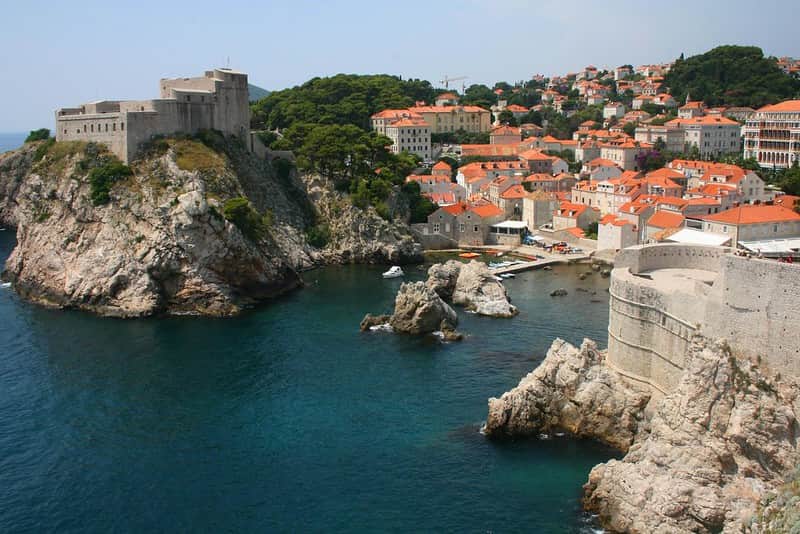 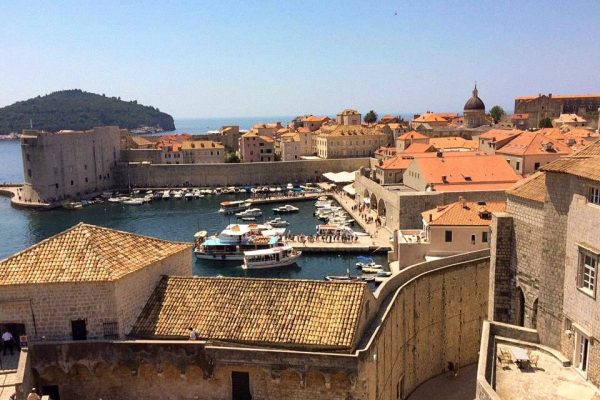 Besides these, there are many exotic locations in Croatia like Krka National Park, Korcula, Pula, Rovinj, and Ziatni Rat Beach. If you have time and resources they are also worth a visit. However, I have made a 10-day itinerary covering the major tourist attractions

Day 1:    Reach Zagreb and spend the day there.

Day 2:    Rent a car or take a bus to reach Plitvice at your convenience. There are about 10 buses leaving for Plitvice daily from early morning to late at night. The journey will take about 2.5 hours. Stay the night at Plitvice

Day 3:    Get up early and explore Plitvice before the place is swarmed by tourists.

Day 4:    Leave early for Split via the rented car or use the bus again. This time the journey will take approximately four hours. Buses start from early morning, but the travel time varies from 3.30 hours to 6:30h. So check before you book.

Day 5:    Spend half the day in Split and leave for Hvar in the evening. Ferry from Split departs every 4 hours and takes one hour to reach Hvar.

Croatia is an amazing destination and one should not miss an opportunity to visit it. The way its popularity is increasing, soon it will become crowded, commercialized and expensive like other beautiful spots in Europe. It is just the right time to visit this paradise.