Mysterious Places In the World

The Most Mysterious Places In the World

Who hasn’t heard about the Bermuda Triangle and its mysterious disappearances? Doesn’t it fascinate you?  Our planet is dotted with strange and eerie locations that have unexplained and titillating mysteries surrounding them.  Despite the best minds working for centuries, we have been unable to determine the historical significance or understand the goings-on in these intriguing places.

There is so much to admire and experience in this world. We have exotic locations, historical places, man-made marvels, and cities of tomorrow. But there are few destinations that still have that intriguing element that attracts us.  Who is not fascinated by mysteries? Let’s have a look at these mysterious spots.

For decades, the fabled Bermuda Triangle has intrigued the world. The Bermuda Triangle is a vague triangle-shaped portion in the Atlantic Ocean and is bordered by Miami, Bermuda Islands, and Puerto Rico. Stories of ships, aircraft, and even humans disappearing in this triangle have been emerging for ages. No one really knows the reason for their disappearance. There are so many theories for this vanishing act – tropical cyclones, magnetic anomalies, methane eruptions, extraterrestrial activity, and sea monsters. Few even believe that it is a tunnel to another world.

US Coast Guard and US Navy believe that no extraordinary or supernatural factors were involved in the disappearance of planes and vessels. Environmental considerations, human error, and coincidences can be the reason for these disasters. The scientists claim that the mystery of the Bermuda Triangle has been ‘solved’ as there was no mystery to solve in the first place. But why did that limited area had so many disappearances? And why no traces of the sunk vessels were ever recovered? The debate and theories will continue in times to come. But the mystery of the Bermuda Triangle keeps on intriguing the world and one would think twice before passing the dreaded triangle.

A few miles from Mexico City, lies the Island of Dolls, one of the world’s scariest tourist attractions. If you are brave enough to set foot on this island, you will see hundreds of dolls with twisted limbs, lolling heads, and blank eyes hanging from trees and wooden shacks. Local people say that the dolls even whisper, open their eyes and move their heads and limbs. The story behind the Island and dolls is even more terrifying.

The owner of the island, Don Julian Santana Barrera, found the body of a little girl and her doll in the canals outside the island. He hung the doll from a tree as a sign of respect for the little girl. The guilt of not being able to save the girl gnawed at Santana’s conscience and he was convinced that her spirit haunted the island. He gathered abandoned dolls from garbage and canals around the island and hung them on trees. This became an obsession and he kept on hanging them for 50 years, till he died.

The Dolls are still hanging there in deteriorated condition and have become home to insects and spiders. It is now a popular tourist destination, where tourists come to see the scary dolls and hang a doll of their own, as a homage to the girl and Don Julian.

In the West of Poland, a forest of about 400 pine trees are all uniformly deformed. The trees are bent over almost 90 degrees at the trunk before curving back to grow straight up from there. All the trees bend northwards and are healthy in spite of such unnatural curves of the trunk. The trees were planted in the 1930s in a forest near the town of Gryfino. During the Second World War, the town was completely devastated and the secret of crooked trees was lost with it.

Experts feel that the pine trees were deformed when they were 5-7 years old. There are lots of theories, but no one actually knows how the trees got curved. There have been stories of the young pines being crushed by torrential snowstorms/alien spacecraft/enemy tanks.  Some believe that there was some unique gravitational pull that resulted in trees growing in this odd shape. The most prevailing hypothesis is that the trees were intentionally altered by the farmers so that the natural bent trunks can be used to make furniture, carts, and boats.

Whatever you may believe, it cannot be denied that the Crooked Forest looks weird and mysterious. And the best part is, that you can visit the Forest if you want to help in solving the mystery of the crooked trees. It is just a two hours’ drive from Berlin.

The Nazca Lines are an ancient cluster of around 300 giant geoglyphs that were etched into the desert terrain more than a millennium ago. Some of these furrows – depicting humans, plants, animals, and geometric patterns – are nearly 1200 feet long and can only be identified from the air. No one knows why they were trenched across the desert landscapes by the ancient Nazca people and how they managed to stay etched in the desert for so long. Seeing the size of the drawings, people believed that Nazca Lines were made by supernatural elements or aliens. Archeologists, however, believe that Nazca Lines had calendrical or astronomical associations. While some are of the view that it is a map of some hidden treasures or has some religious implications.

Though the furrows were made in the first century BC, they were generally unknown until the early 1900s. After a century of investigations, we are nowhere near a consensus and the mystery of Nazca Lines still remains intact. Researchers have said that Nazca Lines is “one of the most attractive ancient mysteries in the world”. So, when you take that coveted trip to Machu Picchu, don’t forget to visit the mysterious Nazca Lines in Peru.

If you are fortunate enough to land in Antarctica, you would be looking for glaciers and ice sheets. One thing you would definitely not be expecting to see is a blood-red waterfall. The Blood Falls, located in McMurdo Dry Valley, cascades down from the Taylor Glacier into Lake Bonney. The idea of a waterfall in frozen Antarctica is baffling in itself, but you are mystified when the waterfall in question is five-story tall and the water oozing slowly out of the glacier is deep blood red.

The Blood Falls were first discovered in 1911 by geologist Griffith Taylor when he noticed that a river had stained the surrounding snow cliffs with blood-red color. The scientists concluded that the red color came from the red-hued algae living in the water. It took them 100 years to get to the real cause. The ‘blood’ is an iron-rich brine that oozes out from the salty lake beneath the glacier. When it reaches the surface and comes in contact with air, it oxidizes and turns to a rusty red color.

The waterfall can only be reached by helicopter or cruise ships. The mystery of Blood Falls seemed to have been solved for the time being, but the reddish blood seeping out will definitely remind you of some horror movies.

Built between 3000 BC to 2000 BC in Wiltshire, Stonehenge is the most mysterious landmark in Britain. The megalithic consists of 100 huge upright rocks, weighing around 25 tons, arranged in a haphazard circle. The inner ring of Stonehenge is made of bluestones that originate from the South of Wales, which is 100-150 miles away from Stonehenge.

The iconic archeological site has fascinated everyone for ages and has resulted in countless theories and stories associated with this mysterious place. Stonehenge has baffled historians regarding its construction and significance. How were the heavy stones carried from Wales to the Stonehenge site? Was the prehistoric monument a burial ground, an observatory, or a religious site? Some believe that it was built for human sacrifice or to showcase the winter solstice.

The mystery surrounding Stonehenge has made it a very popular tourist destination. No one knows for what purpose it was built, and that adds to the charm and fun of visiting Stonehenge. About one million people visit it every year. 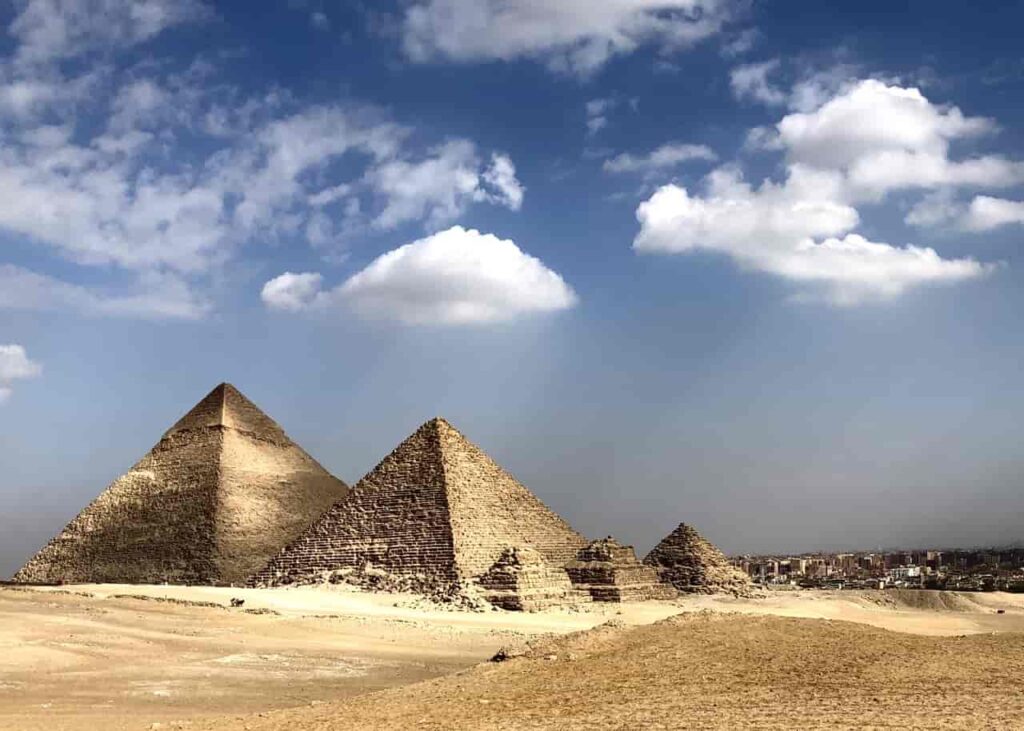 Though the Pyramids in Egypt are one of the most visited places on Earth, they still remain a source of mystery and wonder. The trio of Pyramids at Giza has baffled the historians ever since they were discovered. It is still not clear how the ancient Egyptians managed to build these huge structures made of 2.3 million stone blocks with limited raw material and primitive technology. And let us not forget that the relics are so strong, stable, and precise that they have managed to survive everything for the last 4500 years?

After years of investigation, Pyramids are still shrouded in mystery and new secrets are revealed every day, challenging the past theories. Scientists, Historians, and archaeologists have been trying to understand the ancient architectural wonders for centuries. We have always believed that Pyramids were built as tombs for Pharaohs and wealthy people and filled with all they might need to sustain them in their journey to the next world. But this also now being challenged.

No Mummies have been found in Pyramids to date. There are lots of rooms that have not been explored, but it is not possible to do so because the Pyramids may be damaged. All this has led to a new theory, that the Pyramids were never meant to be tombs, but were meant to balance electromagnetic energy. It is said that the Pyramids are built in the literal center of the Earth, further deepening the mystery. Some Interesting Facts About Egypt

There are many more mysterious places around the world and we will discover a few more in time to come. Whatever be the mystery or danger associated with these locations, most of us are intrigued by them and would love to visit them, if given a chance. Another option is to see the best festivals in the world.

Best Places to in Croatia